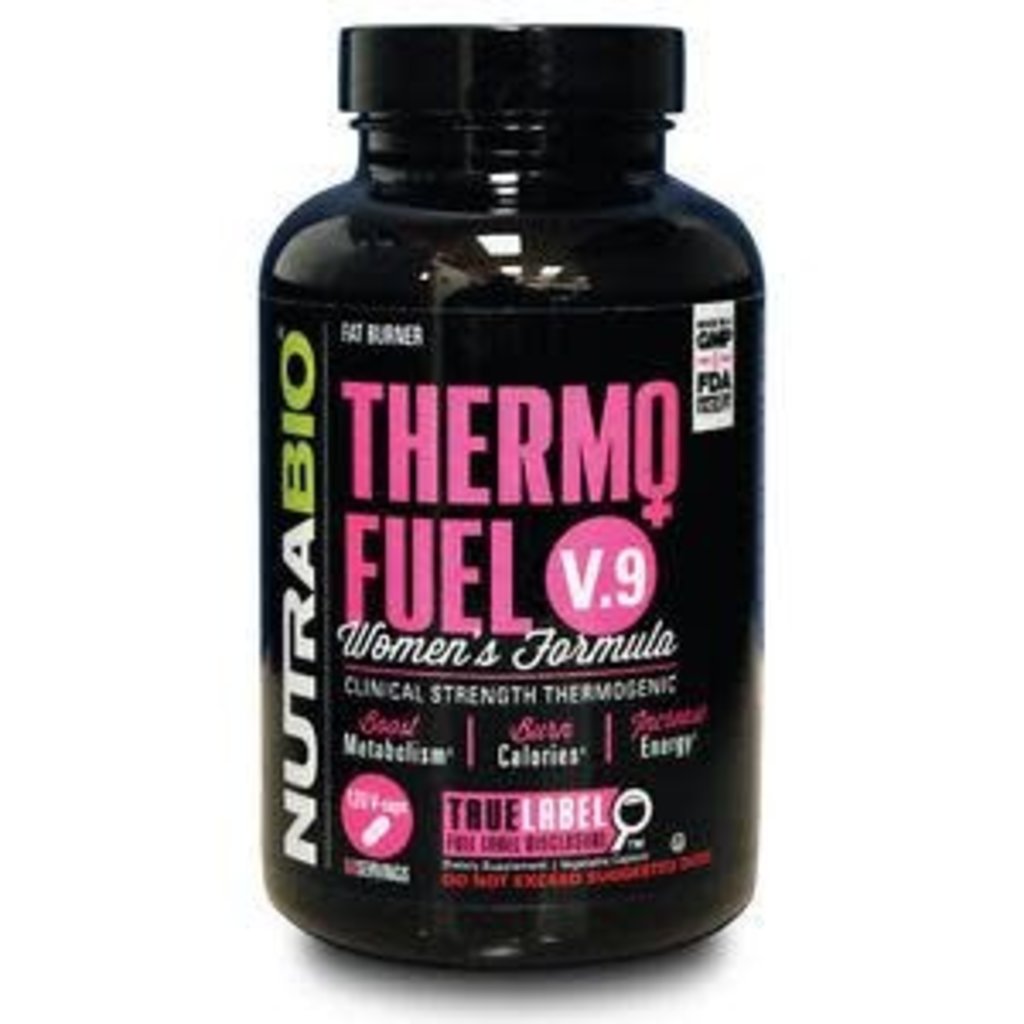 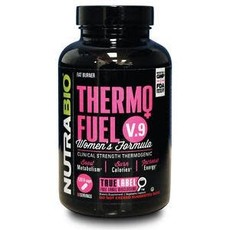 Our first version of ThermoFuel was launched in 1998 as a powerful thermogenic fat burner, and after 17 years of continuous development, our newest version, V9, is the strongest yet. If you are serious about making a change in your body and have started eating healthier and exercising, then ThermoFuel V9 can help you reach your goals. ThermoFuel V9 contains key nutrients that can enhance your body's ability to become lean. These nutrients are specifically formulated to target multiple aspects of weight loss, including appetite stabilization, improved metabolism, fat blocking, insulin control, blood sugar stabilization, and fat utilization.

Like all NutraBio products, ThermoFuel V9 does not use proprietary blends to hide the real dosage of its ingredients. Each active ingredient in this formula is in its full therapeutic dosage, which is fully disclosed on the label. In addition, ThermoFuel V9 contains no additives, fillers, or excipients. We made these quality commitments over 15 years ago because we believe you have the right to know exactly what you're putting in your body.

Stage 1: Boost Metabolism though the Use of Caffeine and Green Tea Extract

In addition to its impact on metabolic rate, caffeine can affect substrate utilization during exercise. In particular, research findings suggest that during exercise, caffeine acts to decrease reliance on glycogen utilization and increase dependence on free fatty acid mobilization. Essig et al. reported a significant increase in intramuscular fat oxidation during leg ergometer cycling when subjects consumed caffeine at an approximate dose of 5 mg/kg. Additionally, Spriet et al. demonstrated that following ingestion of a high dose of caffeine (9 mg/kg), net glycogenolysis was reduced at the beginning of exercise (cycling to exhaustion at 80% VO2max). Consequently, performance was significantly improved. The results of this study suggested an enhanced reliance on both intra- and extramuscular fat oxidation.

In addition to caffeine, green tea extract has also been investigated for its potential to elevate resting metabolic rate. Specifically, these investigations have reported that green tea extract significantly elevates 24-hour energy expenditure, possesses thermogenic properties, and promotes fat oxidation beyond that explained by its caffeine content. In addition, tea ingestion resulted in significantly more fat oxidation (12%) compared to a water control.

Stage 2: Increase Thermogenesis Through the Use of EGCG, Cayenne Pepper, and Advantra Z®

Thermogenics are compounds designed to amplify body heat production, thereby increasing energy expenditure and promoting weight loss. One such compound is epigallocatechin gallate, also known as EGCG. EGCG has been theorized to increase energy expenditure by stimulating brown adipose tissue thermogenesis. In support of this theory, Dulloo et al. reported that EGCG in combination with caffeine (e.g., 50 mg caffeine and 90 mg epigallocatechin gallate taken three times per day) significantly increased 24-hour energy expenditure and fat utilization in humans to a much greater extent than when an equivalent amount of caffeine was evaluated, suggesting a synergistic effect. Recently, Di Pierro et al. reported that the addition of EGCG to a hypocaloric diet resulted in a significant increase in weight loss (14 kg vs. 5 kg) versus a hypocaloric diet alone over a 90-day clinical trial. Theoretically, the increases in energy expenditure via EGCG supplementation may help individuals lose weight and/or manage body composition.

A second thermogenic compound in ThermoFuel V9 is cayenne pepper. Studies suggest that chemical compounds in cayenne have the ability to increase the body's heat production, thus increasing the rate of metabolism of fats and carbohydrates. Additional research also indicates that cayenne increases the production of epinephrine and norepinephrine, which together decrease appetite. For dieters, it has been suggested that adding cayenne to a day's diet reduces hunger after meals and reduces calories consumed during subsequent meals.

The last thermogenic compound added in ThermoFuel V9 is the patented compound Advantra Z®. Because Advantra Z® contain synephrine, it is able to stimulate thermogenesis, increase lipolysis to facilitate the burning of fats for fuel, reduce weight, increase lean muscle mass, and suppress appetite. Advantra Z® also improves athletic performance and uptake of amino acids into muscle cells. Advantra Z® offers many of the metabolic-enhancing effects of ephedrine without the dangerous side effects. Unlike ephedrine, Advantra Z® does not influence alpha-1, alpha-2, beta-1, or beta-2 receptors, which affect blood pressure and heart rate, making it a safe and effective tool for weight loss. Advantra Z® only stimulates beta-3 adrenergic receptors, which increase lipolysis in fat tissue and thermogenesis in skeletal muscle.

Stage 3: Use Fat as Fuel Through the Use of Acetyl-L-Carnitine

Carnitine plays an important role in converting stored body fat into energy. Carnitine's primary function is to regulate fat metabolism and transport fatty acids into the mitochondria of cells, where they are oxidized and converted into energy. Studies suggest that athletes may need more carnitine than their body can produce, so supplementing with carnitine can lead to improved exercise capacity and a reduction in stored body fat.
During intense exercise, carnitine may help reduce the respiratory exchange ratio and lactic acid buildup in muscles, leading to increased energy and greater resistance to muscle fatigue. Put simply, carnitine helps your body burn its own stored fat as energy, leading to increased endurance, work output, and exercise capacity. Studies show that it may even preserve muscle glycogen during exercise, keeping you energized even longer.

ThermoFuel V9 contains acetyl-L-carnitine, which is a stabilized and more bioavailable form of the amino acid L-carnitine. The addition of the acetyl group to the L-carnitine molecule allows it to easily pass through the blood-brain barrier, where it plays an important role in protecting and supporting brain function. Acetyl-L-carnitine is involved in aspects of neuronal metabolism because its molecular structure resembles the neurotransmitter acetylcholine. Supplementing with acetyl-L-carnitine may improve production of acetylcholine and stimulation of protein and membrane phospholipid synthesis.

Stage 4: Appetite Suppression Through the Use of L-Tyrosine

Although many of the other active ingredients found in ThermoFuel V9 act as appetite suppressants, L-tyrosine may exhibit the strongest effects when it comes to curbing hunger. This is due to its role in the production of the dopamine, epinephrine, and norepinephrine. These neurotransmitters help create a sense of satiation (feeling of fullness), which in turn help reduce cravings. Furthermore, supplementing with L-tyrosine may be an effective way to safely boost the metabolism of overweight and obese individuals. Tyrosine has been shown to influence the production of thyroid hormone levels, specifically thyroxin, a hormone that regulates the body's metabolic rate.

The Bottom Line on Fat Loss

Maximizing fat loss and achieving a lean, hard physique requires putting in work at the gym and in the kitchen. ThermoFuel is not a magic pill like other brands claim, however along with proper diet and exercise it can give you that extra push. The clinically dosed ingredients found in ThermoFuel V9 create a synergistic combination, working together to make your dieting and training efforts more effective. With ThermoFuel V9, you don't need to worry about cutting through all the bull; NutraBio has done that for you with our fully transparent label! All that's left to do is to let ThermoFuel V9 cut through the fat.

+ Add your review
0 stars based on 0 reviews

Not happy with your purchase? Ship it back to us on the house.
Have questions? Chat with an expert now
Add to wishlist / Add to comparison
Sign up for our newsletter